Kanye West’s former girlfriend Julia Fox and rapper Azealia Banks have been slamming one another on social media just days after Julia separated from Kanye.

The fight appeared to start after Azealia branded Julia a “low-rate escort” and her son a “crackbaby” which led to Julia sharing the chats online and claiming that Azealia once asked her for the phone number for a drug dealer .

After Julia – who has a son Valentino with her ex Peter Artemiev shut down claims she cried when she and Kanye West ended their romance, Azealia reposted Julia Fox’s Instagram statement and slammed her, calling her a sex worker.

“We already know the tea Foolia! [You] came to Miami looking for sex work, [the] same lawyer was in contract with Ye and it was a weak PR stunt from the jump,” Azelia wrote.

“What did you hustle him for?” Azelia Banks asked Fox.

“A bag and some Lucien’s? You absolutely did not come up because if this is how women who ‘always date billionaires’ behave when shit goes south, threatening tell-all books… You can kiss your days as a low-rate escort goodbye, sis.”

She went on: “The things you have made public in regards to your drug abuse (shit he probably had no clue about in the beginning) are not what he needs associated with him in any custody battle that may arise in court during divorce proceedings.”

In another post, Azealia then branded Julia a “liability,” adding that “the fact [she] thought [Kanye would] pick [her] over his children just reeks of entitlement, a lack of any real motherly instinct, and proves that [she is] in fact, a woman child.”

“We won’t be purchasing your book, I wouldn’t write it if I were you. It’ll make [you] look racist and bitter. You are not Karrine Steffans level of legendary. You’ve already told your secrets, sis. It’s over.”

Azelia then went on to address rumours that she had a crush on Kanye.

“”Babes, Kanye has tried to sign me four times. I’ve repeatedly rejected him. Kanye has a crush on me, but I like his white friends more tbh,”

She then claimed that Kanye owes her “A LOT of money.” 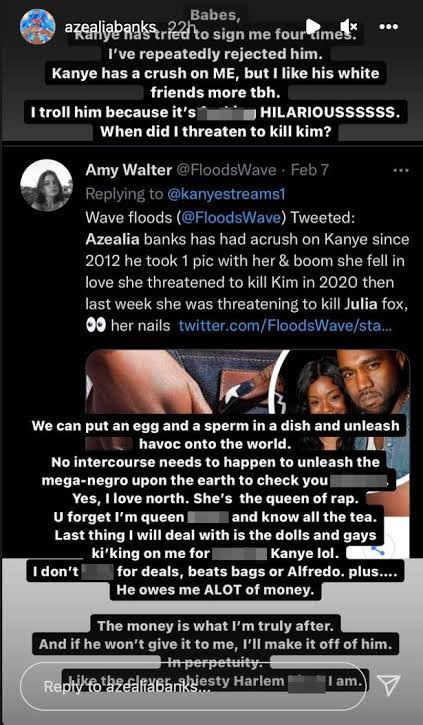 In another message, Azealia shared a screenshot where Julia had warned her not to “talk s**t” about her son.”

She typed atop of the message: “Okay your son is a crackbaby….what next.” 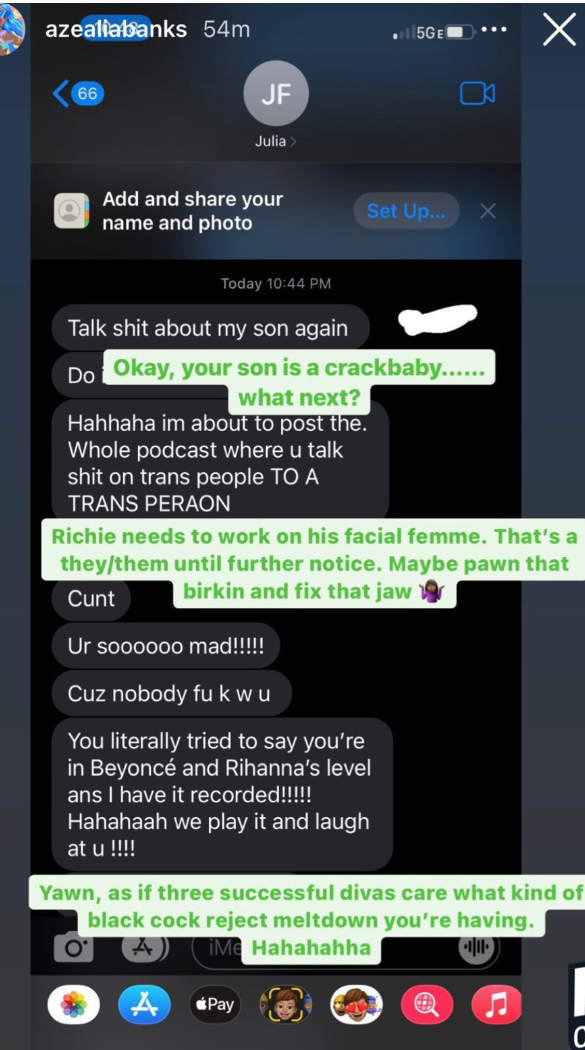 Azealia then uploaded a photo showing Julia sitting on the floor dressed in a bra and knickers injecting herself in the arm with a needle. 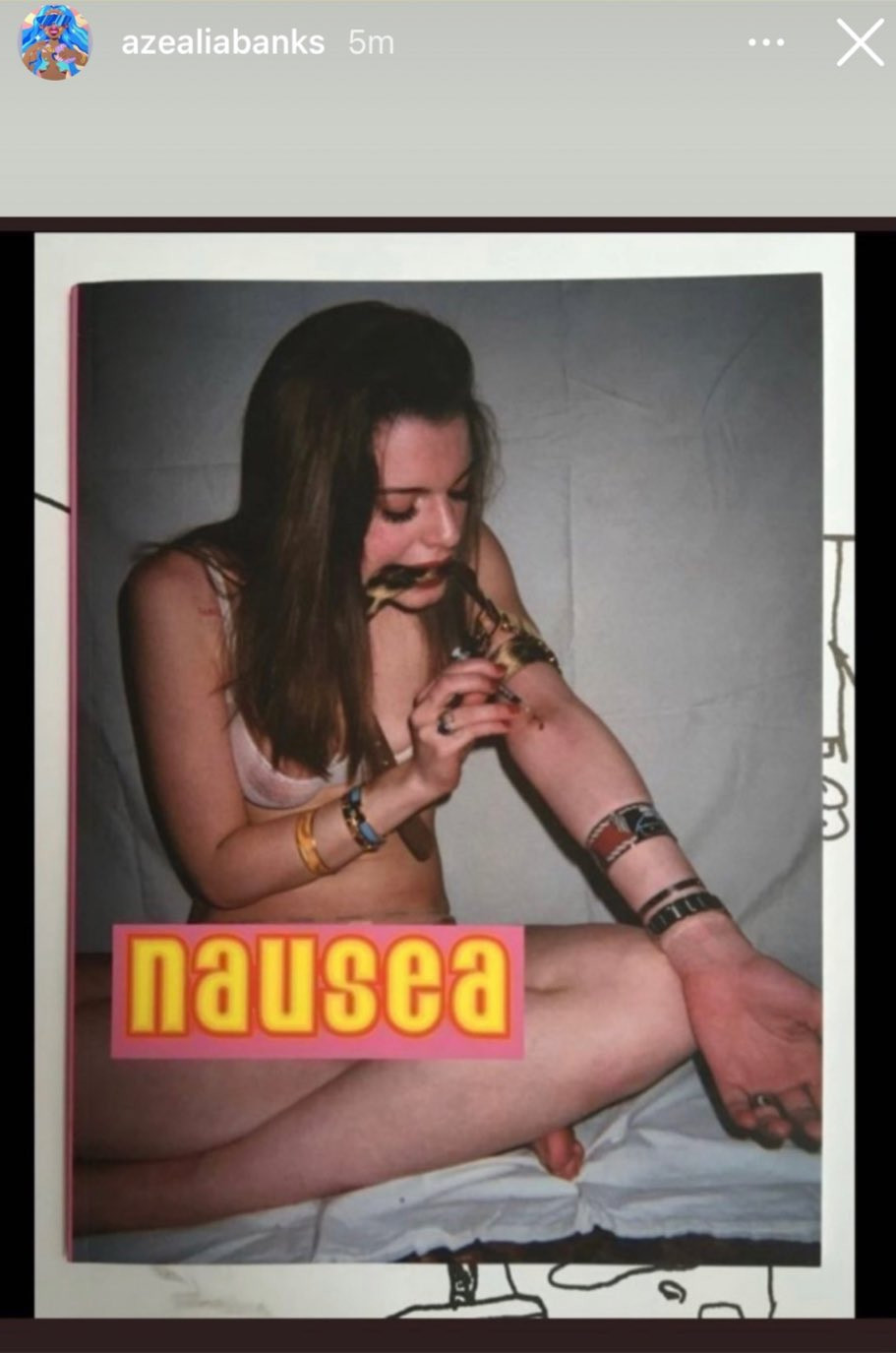 Fox in retaliation then leaked a screenshot of messages that she claims were between herself and Azealia.

In one of the screenshots, Azealia allegedly asks: “Julia who sells molly and Percocet in NYC?” 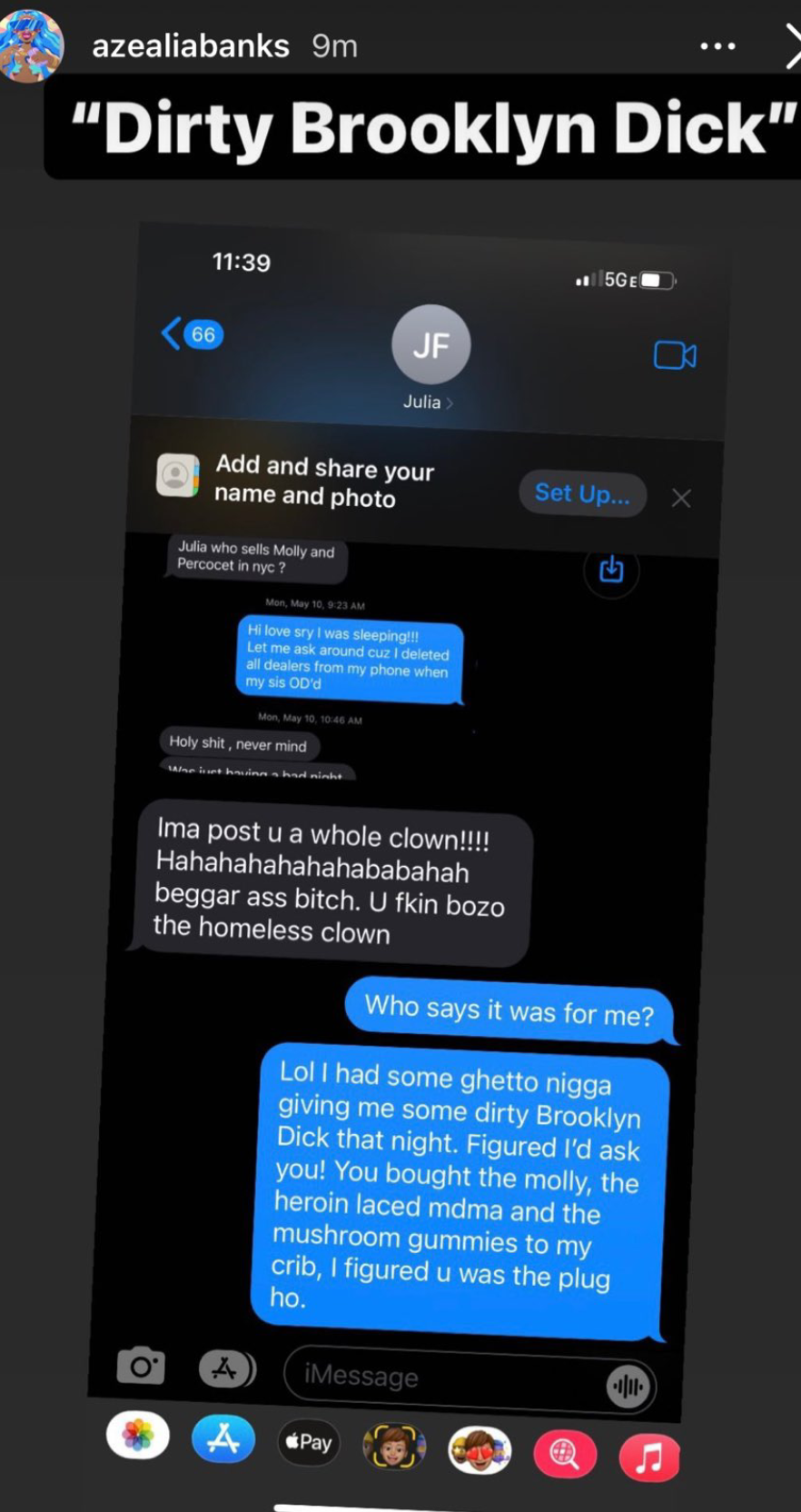 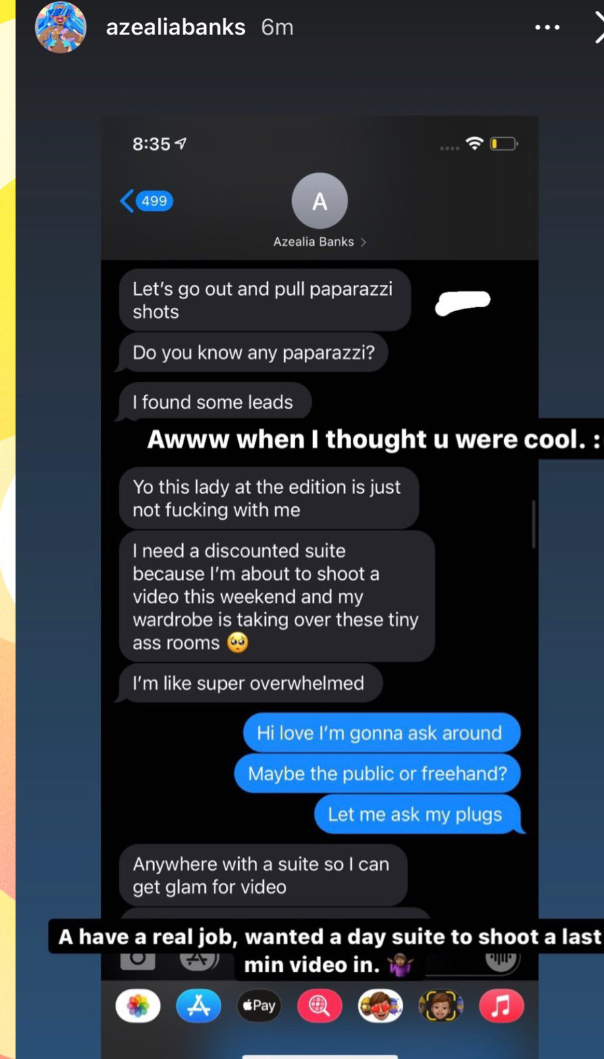 Julia then seems to respond: “Hi love sry i was sleeping!!! let me ask around cuz i deleted all the dealers from my phone when my sis OD’d.”

Fox wrote over the screenshot: “So it has come to my attention that this troll keeps calling me a junkie umm sis do u recall @azealiabanks.”

In a second post, Julia then opened up on her addiction issues.

“I’m open about my issues with addiction because I want to destigmatize it! Not al addicts are ‘junkies’,” she wrote.

Julia continued: “That is so horrible to say. It’s a real f*cking disease. And I’ve also been open about my recovery journey!!! But nobody wants to mention that right….. If this troll says one more thing about my parenting or my son…”

“”She added, “I was too nice to her cuz I felt sorry for her but now I realize why she spends all the holidays alone. Nobody wants that energy sis!!!”

Back in January 2020, Julia revealed that when she was 17 she almost suffered from a near-fatal overdose.

Speaking with The Hollywood Reporter, she said: “It’s kind of a miracle that I’m okay because a lot of the people I grew up with aren’t doing so well,” Fox shared. “They’re still on drugs or in jail. A lot of them died.”

Then in July, she said she is now sober after struggling with heroin and pills for some time.