At least nine (9) students of the University of Education Winneba (UEW) have been confirmed dead while over a dozen others are seriously injured in a fatal accident at Asuboi a community along the Accra to Kumasi Highway.

The driver of the Hyundai Universe Commercial bus was allegedly sleeping behind the steering wheel.

The fatal accident reportedly occurred at Asuboi, a community along the Accra- Kumasi Highway in the Ayensuano District of the Eastern Region.

The accident as gathered involved a Hyundai universe commercial bus with registration number AK 324-22 and a truck carrying a 40-footer container loaded with wood.

According to a Police report, available to DGN Online, the driver on reaching a section of the road at Asuboi on the Accra-Kumasi dual carriage road failed to observe traffic ahead.
He was allegedly sleeping.

In the process he crashed into the forty footer container loaded with wood which fell partially on the road as a result of a previous accident.

Eight passengers died on the spot, and one later died at the Suhum Government Hospital, where the injured victims were rushed to.

The bodies have since been deposited at the Suhum Government Hospital morgue, while the 22 injured passengers are on admission receiving treatment at the same facility at the filing this report.

Meanwhile, efforts by the Police are underway to remove the accident vehicle from the scene to pave way for traffic as the investigation is ongoing. 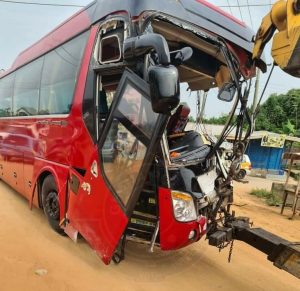 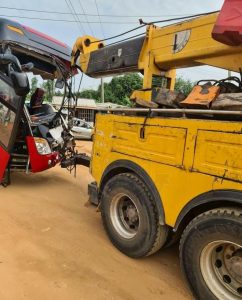