A woman’s night out with a Sri Lankan cricket star began with a drink at Sydney’s Opera House and pizza before she was allegedly raped and choked by Danushka Gunathilaka.

The details emerged four days after the 31-year-old was arrested on Sunday after allegedly raping the woman in Sydney’s eastern suburbs after meeting her on Tinder while in Australia with his team for the T20 World Cup. 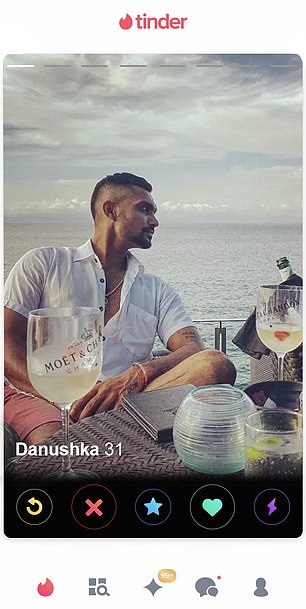 The account is currently on private, meaning the cricketer’s profile is only visible to those he has already swiped right on

One photo on the app shows him lounging in a cane chair on an balcony overlooking the ocean as he enjoys a glass of Moët & Chandon, while another shows him reclining into a business class seat on a Qatar Airways flight.

Police facts allege the woman was choked three times, was forced to perform oral sex and that Gunathilaka removed a condom without permission in an act known as ‘stealthing’.

She allegedly met the cricketer, who went by the name Danushka on Tinder, on Saturday October 29,  and they talked further on Instagram and Whatsapp.

Gunathilaka tried to get her to travel to Brisbane where he was staying but she declined, and the pair met up the following Wednesday November 2.

They met at Opera Bar at Circular Quay, and when he arrived at 8.20pm the woman noticed he looked about 190cm tall and of ‘athletic and muscular build’.

They stayed at Opera Bar for half an hour and Gunathilaka drank two alcoholic drinks. The alleged victim had about five.

The police facts claim the pair then moved to Frankie’s Pizza Bar on Hunter Street, had another drink and then went to catch a ferry to ferry to Rose Bay, where the woman lived.

At the wharf, Gunathilaka stood in front of the woman and allegedly pressed his body against her and ‘kissed her lips forcefully’.

At 10.50pm, they caught the ferry and during the trip Gunathilaka allegedly kissed the woman ‘with force and slapped her buttocks with his hand’, the woman responding by saying ‘oi’.

They then walked 15 minutes to the woman’s house and once inside they sat on the lounge and talked before the cricketer allegedly pushed her ‘onto her back on the couch and manoeuvred himself on top of her’.

The police facts say he then began ‘forcefully kissing’ the woman and put ‘his hand down her neckline’ and the woman asked him to ‘please take it slow’.

When he started removing her clothes, she ‘froze’ and they moved into the bedroom, but Gunathilaka’s next actions made her ‘feel uncomfortable’ and she ‘wriggled away’.

The woman then allgedly agreed to continued intimate activity, but only if the cricketer wore condom, which he agreed to but ‘reluctantly’.

During the next intimate phase the police facts say Gunathilaka had ‘one hand around her neck for 20-30 seconds and choked her’.

The woman was then afraid, and the facts say that Gunathilaka choked her for a second and third time, forced her into oral sex and that she was ‘fearing for her life’ with ‘her breathing severely restricted’. 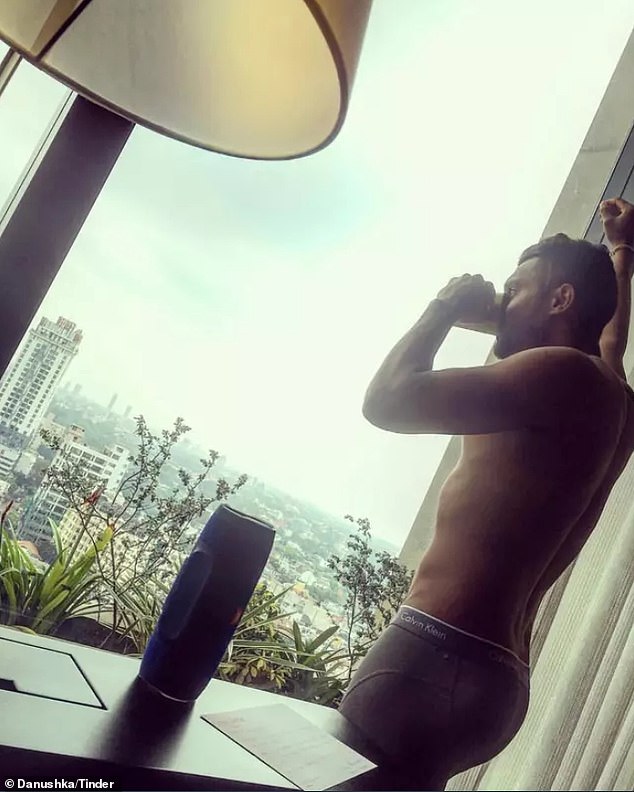 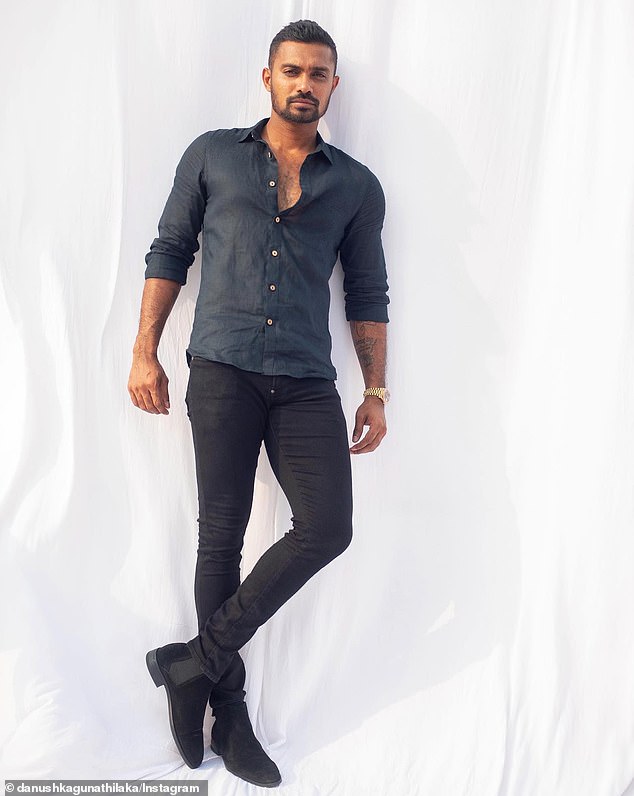 Danushka Gunathilaka, 31, has been charged after allegedly raping a woman he met on Tinder in Sydney. He is pictured above posing for a photographer in one of the first images that featured on his profile for the dating app

She was ‘in shock and did not feel safe saying anything’. She then allegedly saw he was not wearing a condom.

She told police she then endured further alleged sexual activity and after Danushka left by taxi, she felt ‘scared’.

The next day she allegedly awoke with sore and red marks on her body and went to Royal Prince Alfred Hospital and underwent a sexual assault investigation.

In one of the images, the athlete can be seen leaning against a floor-to-ceiling glass window, wearing only underwear, as he sips from a white porcelain mug.

The rest of the pictures in the nine-part collection continue along a similar theme – showing him in front of a backdrop sheet for a photographer, posing in designer clothes in plush bars, and standing on skyrise balconies.

The cricketer, who was denied bail at a hearing on Monday, is currently on remand in Parklea prison, one of the country’s toughest jails in the city’s north-west, where he remains.

The profile emerged amid claims Gunathilaka had ‘developed a playboy lifestyle’ and struggled with discipline on and off the field, including a history of suspensions by the Sri Lanka Cricket Board.

Data obtained by Daily Mail Australia reveals his profile, which uses the name ‘Danushka’, has been switched onto private – a feature only available for premium members.

The setting – available with a $59.99-a-month Tinder Plus subscription-  allows the user to keep their profile hidden on the app, only becoming visible to profiles they have already swiped right on.

It remains unclear whether his account was private while it was in use in Sydney or if the setting has been activated in the wake of his arrest.

The sports star was arrested at a hotel in the Sydney central business district as he and teammates were preparing to depart the country about 1am on Sunday after crashing out of the T20 World Cup hours earlier.

Police allege the 31-year-old committed four counts of sexual intercourse without consent on a 29-year-old woman over a two-hour period at Rose Bay on November 2.

Sri Lanka Cricket has suspended Gunathilaka since the charges were laid and he will remain behind bars at least until he applies again for bail, this time in the NSW Supreme Court. 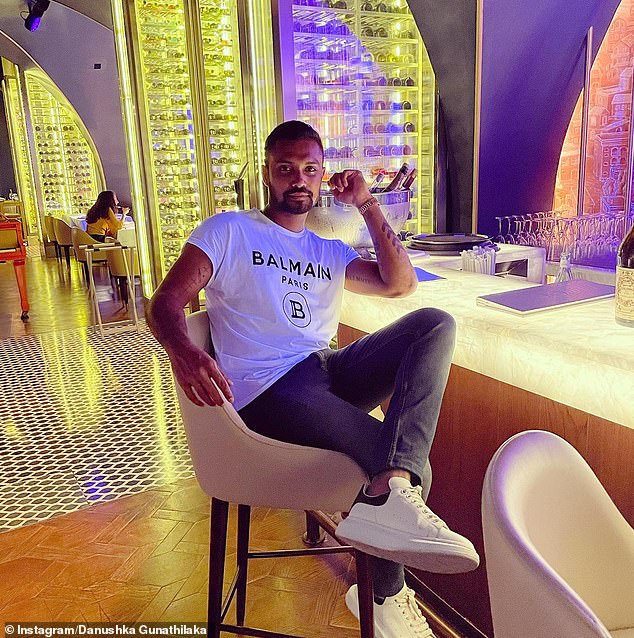 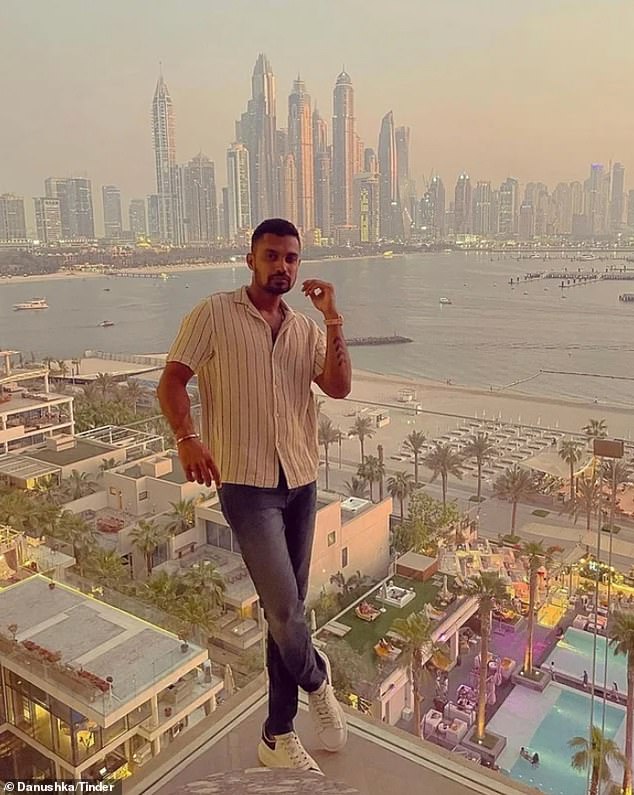 His lawyer Ananda Amaranath told Daily Mail Australia on Tuesday the documents are yet to be filed.

Mr Amaranth said he would try to visit his client on Tuesday at the jail, which is 35km west of the luxury hotel where his manager and Cricket Board officials were still staying.

It has emerged since his arrest and incarceration on remand that Gunathilaka was previously suspended by Sri Lanka in 2018 on a ‘misconduct’ charge after a close associate was arrested for sexual assault at the team’s hotel in Colombo.

Sri Lankan police initially claimed a Norwegian woman was allegedly sexually assaulted in a hotel room by Sandeep Jude Selliah, 26, while his friend Gunathilaka was present.

‘He (Gunathilaka) has said he was asleep and was not aware of what had taken place between his friend and the Norwegian woman,’ the Hindustan Times quoted an unnamed police officer in a report back in 2018.

No charges against Selliah were laid, and there was no allegation against Gunathilaka, who at the time was Sri Lanka’s best-performing batsman on a tour by South Africa.

However Sri Lanka Cricket suspended him on a ‘misconduct’ charge, although allowed him to play in the match that was still underway at the time. 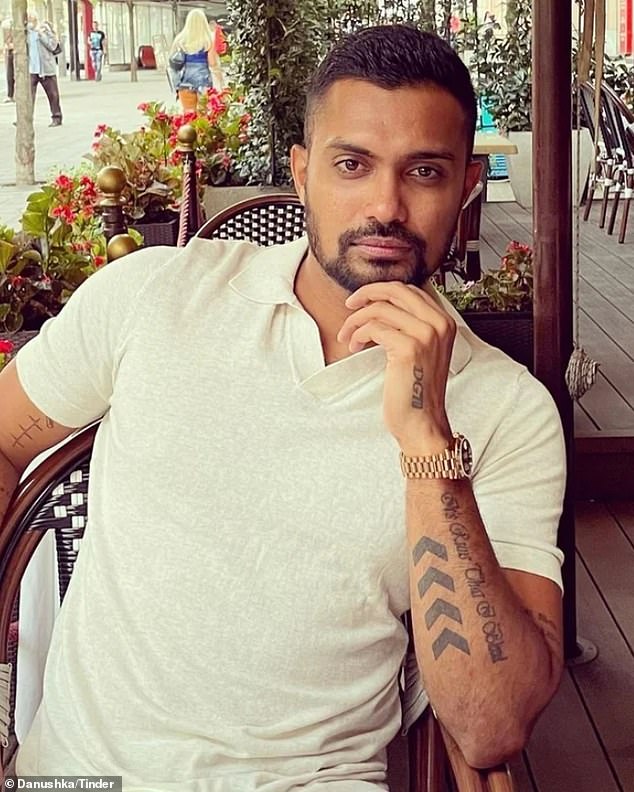 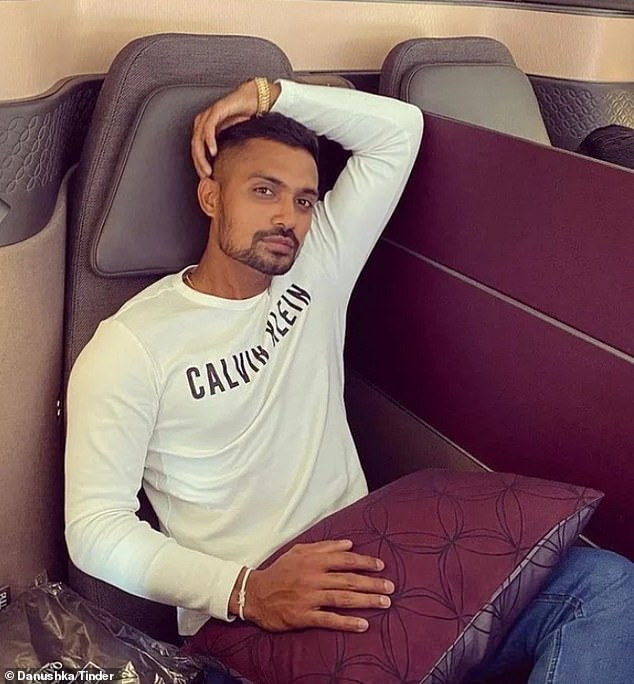 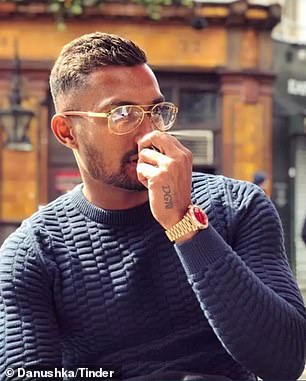 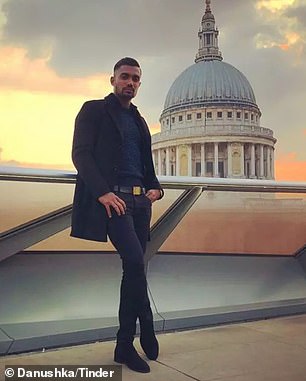 Other photos show the Sri Lankan national in dapper outfits, striking poses for a camera

This followed a suspension the year before, when in October 2017 he missed training on one day, then turned up the next without his kit bag, earning him a six-game suspension later reduced, Nine newspapers reported.

It has been reported that Gunathilaka had developed a playboy cricketer’s lifestyle, without the ability.

‘He wasn’t a popular player with the public, but seems to be well-connected with Sri Lanka Cricket’.

In 2018, Gunathilaka was handed a six-month ban by Sri Lanka Cricket after he broke the team curfew.

He later told ESPN India that he had been criticised for his lifestyle and ‘some people think I’m cocky, but I’m not’.

‘My lifestyle is different to some other Sri Lankan cricketers. But that doesn’t mean I’m a bad person,’ he said.

If I’m at a bar, and I’m with my friends, I’m just there to relax. If people see me there, they’ll think I’m drinking and partying and I can’t play cricket.

‘I don’t have a private life. They’re always saying I’m going clubbing and what not. My lifestyle helps me relax.’ 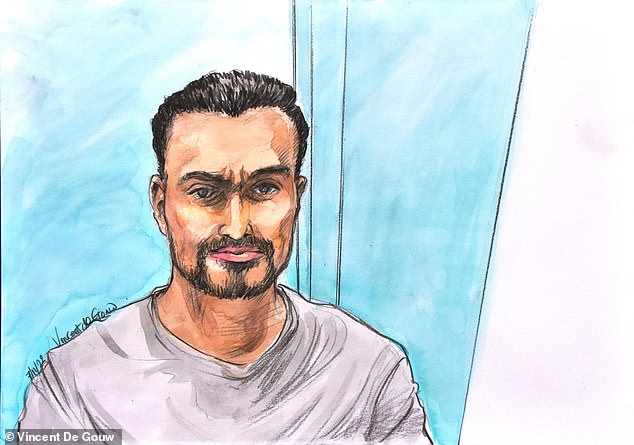 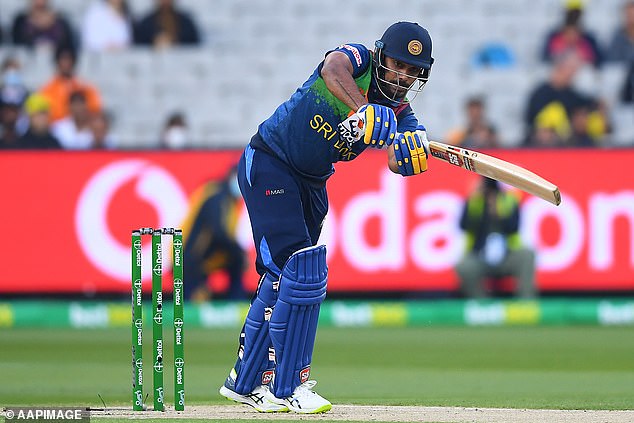 Last year, Gunathalika was suspended by Sri Lanka Cricket for 12 months after he breached his team’s bio-secure bubble during the Covid pandemic on tour in England, along with teammates Kusal Mendis and Niroshan Dickwella.

The cricketer’s game has been plagued by recurring injuries to his back and hamstring and this had caused him to miss Sri Lanka’s games in the T20 World Cup in Sydney.

Gunathilaka, whose lawyer said had no wife or children and lived at home with his parents in Colombo, unsuccessfully applied for bail in Downing Centre Local Court on Monday in a hearing that was closed to the public.

Police had been granted a suppression order restricting access on what could be reported about the 31-year-old’s alleged crimes.

The suppression order will be the subject of a hearing in the Downing Centre on Wednesday.

Gunathilaka appeared in court on Monday by audio-visual link from Surry Hills police station handcuffed and wearing a grey T-shirt with blue jeans.

He has since relinquished his belongings for prison greens and runners.

Mr Amaranath said the cricketer was disappointed his bail application had not been granted. 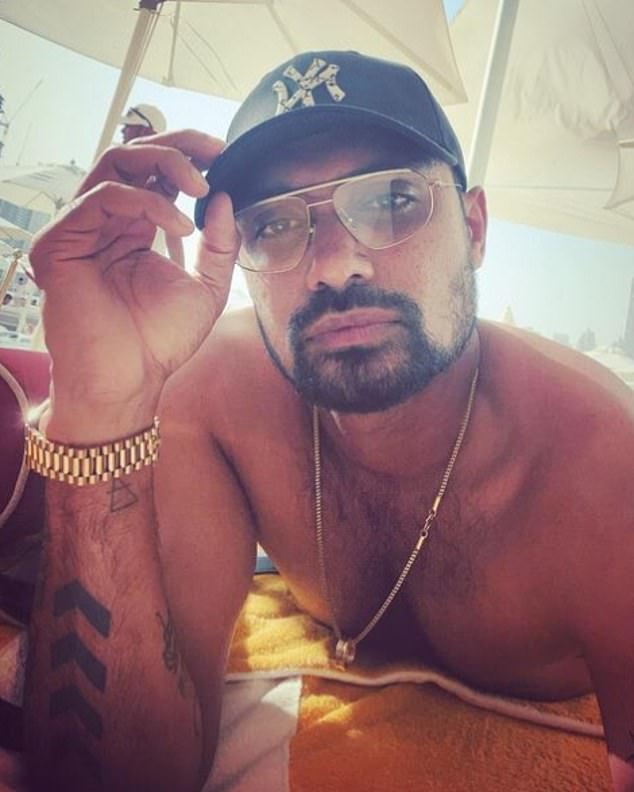 Mr Amaranath had previously said Gunathilaka would be ‘very worried’ if he could not get back to Sri Lanka because it could take a year or more for the case to be finalised.

Gunathilaka has played eight Tests for Sri Lanka, as well as 47 one day internationals and 46 T20 games, and despite not playing in the T20 World Cup had remained in Australia with his Sri Lankan teammates.

Sri Lanka finished fourth in group one with two wins and three losses, including a narrow defeat against England at the SCG on Saturday night.

England will face group two winner India in the semi-finals in Adelaide on Thursday.

Reigning champions Australia won’t defend their T20 title after failing to progress past the group stage.

Gunathilaka should have access to a television in his prison cell and free-to-air coverage of the T20 semi-finals and the final at the MCG on November 13. 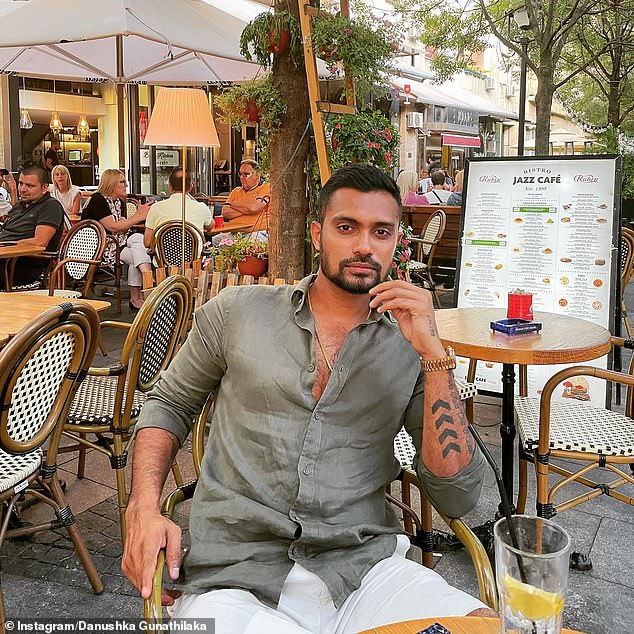