A Twitter user identified by his handle as @SamuelOtigba has taken to the micro-blogging platform to illuminate the importance of being prayerful after he saw his General Managing Director chanting incantations around the office premises.

The man who expressed awe over the bizarre act noted that his boss who claims to be a Christian was seen clad in white, held a chicken and leaf in his hands and chanted incantations, which caught the attention of everyone.

He, therefore, called on people not to be deceived by a person’s corporate appearance as they may be fetish behind closed doors.

“Went to work very early at my old job because I had a work deadline & saw the GMD of one of the subsidiaries on white clothe, chicken in one hand & leaf in the other, chanting incantation around office premises. He’s in his 30s, married, a ‘Christian’ & a Harvard grad…”

Read the vivid narrative below: 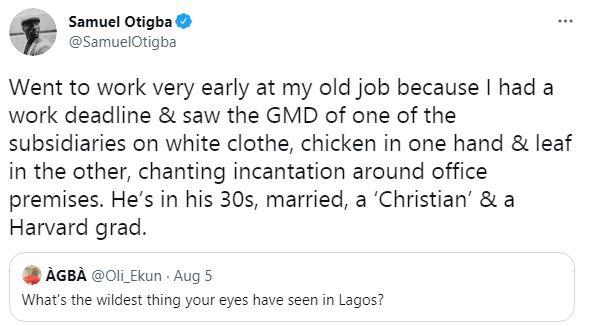