One of the oldest women in Britain just celebrated her 110th birthday, leaving many curious as to what the secret behind her longevity is.

Merah Smith was born in 1912 in Jamaica. She lived through World War I and World War II.

The great-great-grandmother, who lives in Croydon, said at her birthday celebration which held at her granddaughter’s house: “I am very blessed. After the rain yesterday I prayed for a nice day, and look today, there is sun and no rain. It shows that you must always have faith in God.”

Mrs Smith plans to live to at least 115. 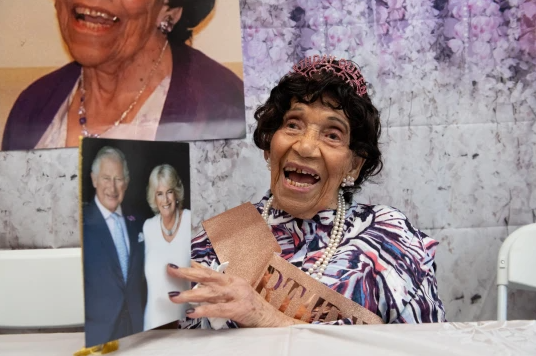 She puts her long life down to her diet and her faith.

She took up kickboxing and dancing hobbies and only gave them up at age 103 when doctors encouraged her to because her knees started to cause her trouble seven years ago.

When asked what the secret to her longevity is, Mrs Smith said: “Eating good food like chicken, vegetables and fruit.

“No stress, but most of all reading the bible, praying and trusting in God.

“I was born in Kingston Jamaica and moved to the UK in 1963.

“I tell you what, I didn’t expect to live so long but anytime the Lord wants to take me, I trust him, he can take me.”

Her favourite decade was the 1930s when she met her husband James, who sadly passed away from stomach cancer in the 1950s. 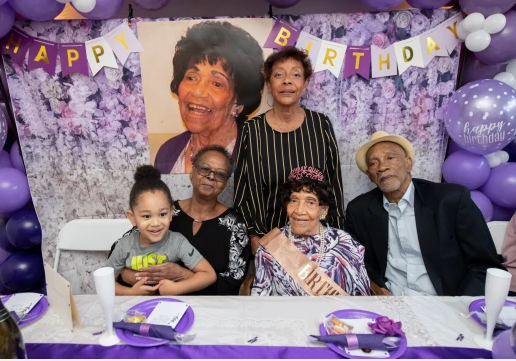 Mrs Smith said: “One of my proudest moments was meeting and marrying my husband, but he died before me.”

At 103, she flew to Jamaica for a two-week holiday and later attended her granddaughter’s wedding in Cumbria.

With this year being more free due to less Covid restrictions, Mrs Smith has been able to keep going to her beloved church, Thornton Heath Evangelical Church, where she has built long-lasting friendships.

Her son Tony Smith cares for her and always cooks her delicious fresh food.  He said he knew she was going to live a long time as she used to exercise a lot.

He said: “She told me she’s aiming to live until 115, and look there’s nothing wrong with her.

“She eats good food and believes in her church, that’s what keeps her young.

‘She used to exercise a lot, going to the gym and kickboxing until only a few years ago when the doctors said she should stop.

“She would also go line dancing in Croydon with her troupe. She is so strong and has a sharp memory and can remember everyone’s name in photographs.

“She’s a person that just keeps giving. I’m proud of her.”

Mrs Smith has received a card from the Queen every year since turning 100, but this year is the first year she has received one from the King.