The suspect in the Michigan school shooting has been identified as 15-year-old Ethan Crumbley.

According to Oakland County Prosecutor Karen McDonald, he will be charged as an adult with one count of terrorism causing death, four counts of first-degree murder, seven counts of assault with intent to murder, and 12 counts of possession of a firearm in the commission of a felony.

Ms. McDonald added that “there are important facts still to be gathered. The process will take time”. She confirmed that Mr. Crumbley is facing life in prison because he’s being charged as an adult.

She said that “there could be additional charges issued very soon” and that Mr. Crumbley was being charged as an adult because of the “seriousness of the crime” under Michigan law. “First-degree murder is the most serious” of the crimes prompting a suspect to be charged as an adult, Ms. McDonald told reporters on Wednesday.

“There are facts leading up to the shooting that suggests that this was not just an impulsive act,” the prosecutor added. She said Mr. Crumbley would be “arraigned later this afternoon”.

She said that “we have become desensitised to school shootings” and that “to prevent further tragedies like the one we witnessed yesterday” gun ownership has to be addressed both on a local and national level.

“Charging this person as an adult is necessary to achieve justice and protect the public,” Ms McDonald said. “Any other option would put all of us at risk of this person because they could be released and still a threat.”

She noted that charging the suspect with first-degree murder “requires premeditation. And I am absolutely sure after reviewing the evidence that it isn’t even a close call. It was absolutely premeditated”. 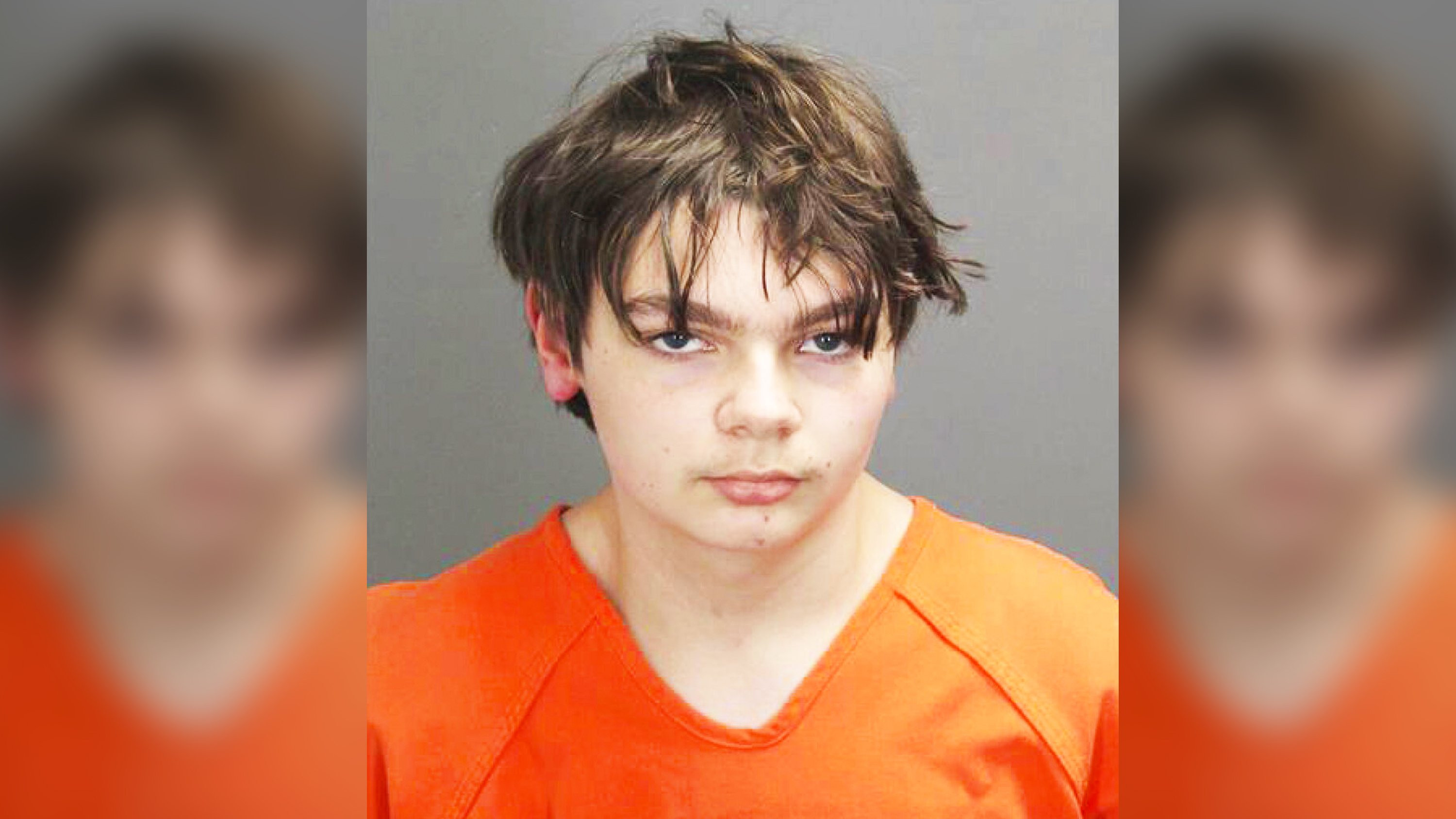 “We are considering charges against both parents and we will be making a decision swiftly,” the prosecutor said.

She added that “there is a mountain of digital evidence, videotape, social media”, leading her to believe that “we can show premeditation”.

Explaining the charge of terrorism, she noted the fear and ramifications for not just those who have died or been injured, but all the students who “ran screaming hiding under desks” and “the children at home right now who can’t eat and can’t sleep and can’t imagine a world where they could ever step back foot back in that school”.

“Those are victims too and so are their families,” she said, adding that “the charge of terrorism reflects that”.

“My focus isn’t on what the school did wrong or right – my focus is on the victims,” Ms McDonald said.

“The response was executed perfectly,” she added, but noted that “four children were killed and multiple injuries occurred, which suggests that we really can’t train ourselves out of this tragedy. We have to address the fact that people should be held accountable”.

“If the incident yesterday, with four children being murdered and multiple kids being injured is not enough to revisit our gun laws – I don’t know what is,” she said. “I’m a parent, there are parents here. There are parents listening. We need to make sure … that when we send our kids to school, they’re safe.”

The father of the suspect had bought the gun used during the shooting, a semi-automatic 9mm Sig Sauer handgun, four days before, according to authorities.

“We know that owning a gun means securing it properly and locking it and keeping the ammunition separate and not allowing access to other individuals, particularly minors,” Ms. McDonald said. “We know that and we have to hold individuals accountable who don’t do that.”

“Hopefully, we’re going to start a long-going conversation and move the needle on appropriate gun control,” the prosecutor added.

After reviewing hours of surveillance footage, law enforcement has said that the suspect came out firing from a bathroom.

Oakland County Sheriff Michael Bouchard told reporters on Wednesday that law enforcement officials were going through video footage from cameras across the school to map the suspect’s actions, The New York Times reported.

He added that the shootings were “absolutely brutally cold-hearted” but that no motive has been identified.

The suspect was being held at a juvenile detention centre as of earlier on Wednesday.

Authorities searched the home of the suspect on Tuesday night. Sheriff Bouchard said they searched his computer, phone, and social media accounts.

The suspect fired between 15 and 20 shots before he was taken into custody by police. Oakland County undersheriff Michael McCabe said the suspect had been in class before the Tuesday shooting and that he “gave up without any problems”.

He added that the parents stopped the police from questioning their child.

The suspect still had seven bullets in the weapon when he was apprehended, Sheriff Bouchard said. “He is not talking and neither are the parents,” he added.

The sheriff said that the suspect acted as if he was an officer to gain access to barricaded classrooms. “We know by witnesses he was tugging on doors, and we know from physical evidence he shot through doors up and down more than one hallway,” he said.

Oakland County Undersheriff Michael McCabe said that Justin died around 10am on Wednesday at McLaren Oakland Hospital in Pontiac.

The other three victims died on Tuesday. They have been identified as 17-year-old Madisyn Baldwin, 16-year-old Tate Myre, and 14-year-old Hana St Juliana.

Oakland County Sheriff Michael Bouchard said during a press briefing on Tuesday night that Tate Myre died in a police vehicle on the way to the hospital. He didn’t elaborate on the other deaths.

Sheriff Bouchard said that 11 people were shot by the 15-year-old gunman and that Oxford is a “quiet sweet community that had its innocence shattered”.

The sheriff added that a 14-year-old girl is on a ventilator after undergoing surgery for gunshot wounds in her chest and neck and that a 17-year-old girl is in critical condition after being hit in the chest.

The shooting is the deadliest on school property in 2021, The New York Times reported.

Undersheriff McCabe said that the arrest took place five minutes after the first 911 call and that Mr Crumbley put his hands on his head and surrendered. Authorities have said that more than a hundred 911 calls were received concerning the shooting.

Sheriff Bouchard told CNN on Wednesday: “It’s clear that he came out with the intent to kill people. He was shooting people at close range, oftentimes towards the head and chest … It’s just absolutely coldhearted murders.”

“We can’t get the motive from the suspect that we have in custody, but we think we’ve got a path to get a lot of supportive information as to how and why this occurred,” he said.