A woman has revealed how embarrassed she felt by her own body after she realised she was only growing one boob on the left side of her chest.

Becca Butcher claims she started noticing her breast was only developing on one side and was forced to stuff her bra on the other side so people wouldn’t notice.

She said she begged doctors for answers but they couldn’t tell her what was wrong with her.

She shared her story on TikTok and she has received support from other users.

Becca explained in a TikTok video: “I noticed it when I went through puberty that one of my boobs was growing and the other one wasn’t.

“I went to my doctor and they said, ‘you haven’t finished going through puberty yet. It’s fine. It’s nothing. It will grow. It’s normal for women to have one bigger than the other. Come back if it hasn’t changed in a few years.’

“At that time I was 13 or 14 years old, but I went back to my doctors again when I was 16 or 17. They said, again, ‘you still haven’t finished going through puberty. It hasn’t finished developing yet. Come back again in a few more years.’

“By that point, it was even more noticeable. I was having to stuff my bra with socks, and I was wearing turtle necks to hide it because I didn’t want anybody to know.”

Since doctors couldn’t help her, she said she has resorted to doing her own investigations and it points her to Poland Syndrome. 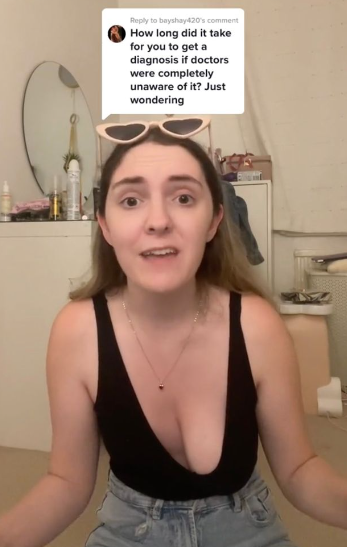 Poland Syndrome is a disorder in people born with missing or underdeveloped muscles on one side of the body, resulting in abnormalities that can affect the chest, shoulder, arm, and hand.

She took this information to her doctor who told her he can’t diagnose her with it because he doesn’t know anything about it, so he referred her to a breast specialist at a hospital.

But the doctor she was referred to had no clue about it either and she left with her mum feeling disheartened about the lack of help available.

Fortunately, a nurse who had seen it all before ,happened to spot her coming down the corridor.

“I’ve seen that before, come and talk to me. So, me and my mom went into this room and spoke to her and she said, ‘yes, this is what it is. I’ve seen it once before in my entire career. Maybe you should go and see a different nurse.’

“I ended up seeing about four or five GP doctors, three nurses, two breast specialists, and a surgeon. I had to go to three different hospitals. I can’t remember if I was 20 or 21, but eventually, my doctor sent me for an ultrasound scan.”

Becca then faced so many doctors having different opinions that she gave up trying to find help from medical professionals.

She is still without an official diagnosis but has made her peace with it, adding: “They just assumed that they would never need to know about it.

“One of the doctors even told me at one point that I could name the condition because it was probably something that only I have and nobody else has it.

“I feel like I’m never really going to know completely everything about this condition. They still don’t know exactly for sure. 100% why even happens, but I’ve just accepted that.”